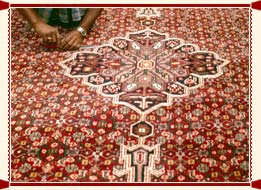 Culture of Bijnor is highly influenced by the Mughals, Nawabs, Rohillas who ruled Bijnor from the early 18th century till the British rule. The state was primarily a Hindu dominated state until Mughal rule. The music, dance, literature, arts and craft were flourished under the Mughal rule. The garments of Bijnor especially Benares sari and chikan work kurtas portray Mughal style of decoration. The people of Bijnor belong to Indo-Dravidian racial group. Hinduism and Islam were majorly practiced by Bijnor people, other than which Sikhism, Jainism, Christianity and Buddhism was also followed. People in Bijnor primarily speak Hindi and Urdu. About seven dialects of Hindi are spoken in the state. Other than dominant languages English, Awadhi, Bhojpuri and Braj were also spoken. The spoken language is a consequent from Indo-Aryan dialects along with the inspiration of Persians.

Arts and Crafts in Bijnor

Arts and Craft forms hold its roots in heritage-rich state Uttar Pradesh. The art and craft products are one of the most shopped products by tourists. Bijnor is well-known for its arts and crafts sale. The Benares rich gold and silver zari works, chikan worked clothes, fine worked carpets and Zardozi embroidery which is done in three magnitudes are some of the famous goods to shop in Bijnor. The carpets designs the nature wealth, Taj Mahal, etc attracts the buyers all over the world. Pottery, wood carvings are also famous craft items in Bijnor.

Music and Dance in Bijnor

Traditional dance and music can still be enjoyed in Bijnor. The Hindustani music finds its roots in the soil of Uttar Pradesh. The current form of ghazal and qawali home Uttar Pradesh as its birth place. The popular folk song form is called as rasiya, it is accompanied with big drums known as bumb, sings the heavenly love of Lord Krishna and Radha. Varieties of songs such as folk, semi-folk, classical and semi-classical are sung by the people of Bijnor on various occasions.

The classical dance form Kathak, in which feet is coordinated with the entire body according to the music beat flourished in Uttar Pradesh, it is also honoured as the state dance. Kathak dance form narrates love between Lord Krishna and Radha. In Charukala folk dance form the dancer balances a pillar of lightened lamps on their head while performing. Charukala dance is performed by women carrying about 51 to 108 lamps arranged in pyramid shape on their head and dances for rasiya tunes.