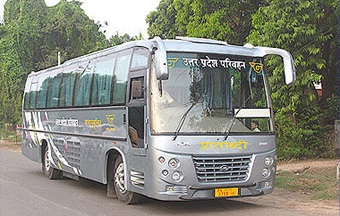 The well connected roadways within Bijnor city also connect its neighbouring districts and states which facilitate the travel by road in Bijnor. The national and the state highway which run through Bijnor add advantage to tourist to access by roadways. Tourist from any part India can reach the beautiful Bijnor city through roadways without great fuss. The national highway connects Uttar Pradesh to its neighbouring states which is laid and maintained by the central government. The state highway is roads connecting the important cities, areas and industries of a district to the national highway.

The two main national highways connecting Bijnor district with other major cities are the Moradabad – Bijnor – Meerut highways and the Haldwani-Bijnor-Dehradun highways. National highway 119 runs through Bijnor city. National highway 119 is 260 km long and 237 m elevation above sea level in the Moradabad division comes under northern zone. The highway starts from Pauri in Uttarakhand, runs through Satpuli, Kotdwara, Najibabad and Bijnor city, it ends in Meerut. Nearly 135 km of the 119 highway lies in Uttarakhand and the remaining 125 km lies in Uttar Pradesh. The state highway connects Bijnor city to Muzaffarnagar, Moradabad, Badaun, Haridwar and Amroha. The state highway no 12 route Panipat-Khatima Marg runs for about 146.98 km covering Muzaffarnagar and Bijnor district.

The Uttar state road transport corporation – UPSTRC, is a public sector passenger road transport corporation which offers bus facilities in Uttar Pradesh and to its nearby states. The UPSRTC buses runs in about 349 routes out of which the Bijnor to Delhi UPSRTC bus route service helps the people of Bijnor and its tourist. The tickets can be booked online or at the UPSRTC office in person. UPSRTC has more than 900 buses of different types and the fare for the travel depends on the route type and its bus type. In Bijnor UPSTRC workshop is located at Vidur kuti road, which provides repair and maintenance service for UPSTRC buses.

Bijnor city has private bus services which can be hired for tours, functions and travel. The fare depends on the type of bus hired, number of days or hours it is hired and the travelling distance. Package booking also can be done. The private buses also run for point to point transportation service from one place to another, for which tickets can be booked in prior of travelling or at the time of travelling depending upon the seat availability. Quality drivers are also provided by the agency.

The following are the list of private bus services in Bijnor

The following are the list of bus stands in Bijnor

Explore more about Transport in Bijnor